I’ve set a bit of a challenge for myself. I’m going to try new activities or classes on a monthly basis, gaining exposure to new ideas, while networking under creative circumstance and all the while finding new sources of inspiration. If ideas are by nature are evolutionary, layers on top of layers of thoughts, the more variety in ideas, the greater the potential for more creative ideas. Getting back from Asia, and as much as I’ll deny it, turning 30, has instilled me with the desire to be more creative, at least in in my productivity.

My idea is to attend a variety of classes, courses or activity, get the most basic foundation and percolate the ideas. And I’m finding it works. Whether inspired while doing headstands in yoga (my December activity), solving a rubik’s cube, or speeding up my Travis picking, the ideas come when I’m least expecting them (like when you are looking for the keys…).

My first contribution to this project was an Improv Comedy basics course, at the Montreal Improv Center. 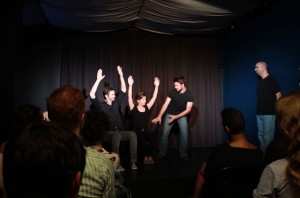 I’d done it before, a couple of times at the free drop-in workshops at Theatre Ste Catherine, but a combination of being intimidated by the over eager pros, looking to get stage time and Sunday morning hangovers, made that short lived.

This beginner improv comedy course was very accessible and with 2 previous improv classes making me one of the more experienced students. The variety of backgrounds in the class, from accountants, engineers, HR, art students, and wherever I’d fall in, had one thing in common – we were completely unaccustomed to being funny.

Lesson #1: Funny is about the unexpected.

A good joke begins with the setup, builds slowly, until the audience is right there along with the teller. And then the punchline, the twist, catches the audience off-guard and releases an unconscious gasp – that sounds like a laugh, usually. The biggest laughs came out doing simple exercises like passing an invisible object around in a circle until someone messed it up – which without fail produced a unanimous wave a laughter. It was quite consistent. The funniest moments were the ones that would be classified as “mistakes”.

Our instinct in conversation, work and especially as beginners in improv comedy is to be thinking ahead. Where is the conversation going? What is the next point I’d like to make? What is my character going to say or do next? When you have to say yes to whatever your partner proposes, whatever you were thinking is actually an impediment to accepting the offer. Having expectations of a scene means you are not going to accept someone else’s ideas. Try it, “Yes, and…”. It builds ideas in a very positive  and collaborative manner.

Lesson #3: You can communicate very effectively without speaking.

We had this really surprising exercise one class, where we stood around in a circle and passed an invisible “ball” around the room, using our eyes only. It was an exercise in listening with your eyes. Another exercise was assuming an exaggerated posture that we felt represented authority (or submission) as well as an emotion. It was amazing how easily the nature of a conversation changes by making eye contact, posture, hands, and feet. The number of times the teacher told us to take our hands out of our pockets…

Our instinct in building a story is to be as far out as possible. In this one sketch, I came huffing out on the stage, petrified of (in my mind) the brain eating zombies who were after me. My partner, immediately assumed that I was crazy, and took on the role as my shrink, telling me it was going to be ok. Saying yes to her offer made my scene a challenge, a scene that would have been one as it was. The teacher stopped us pretty quickly and made us start over. We ended up as a hard nosed sexist republican and a feminist democrat on date leaving a movie – which was not only an easier character to get into, it gave us so much more room to explore the scene without quite absurd limitations.

Improv of any kind, is an experience that forces you so far out of your comfort zone. The public speaking vs. fear of death debate might be exaggerated, but every time you have to get up on the stage, there’s the overwhelming fear that you will make a fool of yourself. You don’t. No one does. It’s empowering, and  builds a confident stage presence (for all of you who want to improve your public speaking). And the laughter is some great medicine.

What to do next?