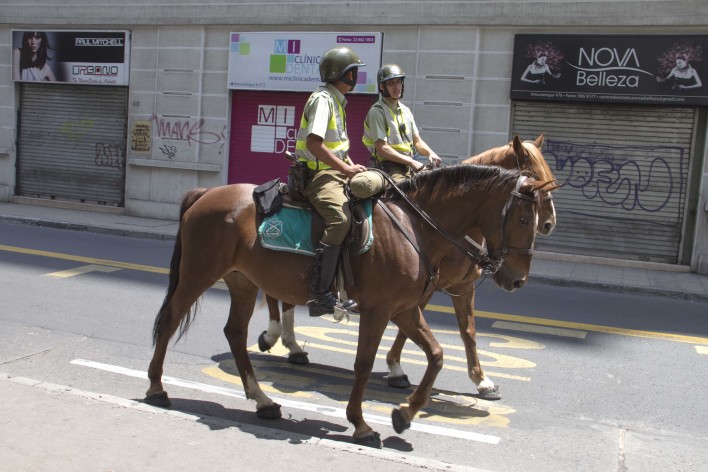 It’s been an exciting few weeks here. The ups and downs of moving to a city on the other side of the world, with not an old friend in sight. No familiar restaurants, bars and neighbourhoods. On the plus side, it brings on a whole new need to re-establish what is thought of as the norm.

A few weeks in, and here are a few things I’ve noticed about Santiago...

Whistling at women is more than a right, it’s a sport. As are really long stares. I used to think Montreal was a “long-staring culture”. Here I’m the only one without x-ray vision.

Buying coffee beans and certain kinds of shampoo is behind the counter. Although there’s a strong chance it’s just this bohemian neighbourhood I’m living in. That said…

…Classism is a thing here, with almost a virtual wall separating Las Condes from the rest of…the country.

Chilean food. I still haven’t figured it out. I shop at an absolutely incredible market, with fruit and vegetables that won’t be seen in North America for another few days or weeks, yet go to a Chilean restaurant and salad dressing is a bottle of lemon juice and a salt shaker. On the bright side there is a poutine like dish called the Pobre, while lacking that wonderful saucy greasiness, it is close.

The transportation system is one of the best I’ve ever been on, up there with Tokyo.

While there are great public spaces, I haven’t seen a soccer field. Probably because two of their best spots are hills .  I have seen a couple very good looking skateparks.

The startup scene here is quite something. The Startup Chile program (affectionately called SUP) gives a approximately $40,000 to bootstrapping startups to setup shop here. They have a new generation each quarter, and grant the funds to the top 100 ideas – out of 3000!!! Perhaps most globally minded and forward thinking is the fact that the program is run in English.

The police here seem surprisingly decent. They don’t have time for ticketing jaywalkers, harassing homeless people or not letting people juggle fire in public parks well past midnight. But when they want to end a football celebration, water cannons and SWAT teams it is (we escaped, though barely).

Everyone has repeatedly warned me to watch my things. I’m expecting to be robbed. If I don’t get robbed, I’ll think everyone just wanted me to stay in late at night to miss the good parties. A conspiracy I believe in…Oh, happy hour goes to 9 or 10, restaurants open for dinner at 7, and there’s not a dancing shoe to be seen before 1 in the morning.

People here are so incredibly friendly. Ok, I don’t understand most of what they say. The last time I said this to a colectivo driver, he sighed and said, “Si, por los extranjeros”.

There are swimming pools in all the apartment complexes we’ve visited or stayed at – somehow the one in my building is colder than a Laurentian lake in the fall.

Take the goddamn funicular, it’s generally there because it’s a long or hard walk. Or stay on the path. Don’t take the shortcut which is evidently the mountain bikers’ trail.

Style is confusing here. My shaver broke, and I can’t figure out what message I’m sending with my uneven but thickening facial mess. I also hate tucking in my shirt but it seems that only the homeless and startup people don’t.

We just ran the numbers – if I drink the same amount of alcohol I did in Montreal, roughly 2 bottles of wine a week, I’ll have savings of over $600 in the 6 months here, that’s more than half my plane ticket! And those who know me will probably attest to that being a tad on the conservative side.

People do say hello to each other here without much thought. In the elevators it’s a big thing. In Spanish though, hi is generally not enough. There buenas dias, noches, tardes and ciao. So to make everyone’s life easier, it’s been shortened to “buenas”. Literally just “good”.

That’s pretty much how it is here…

Taken on my iPhone from the Santa Lucia lookout