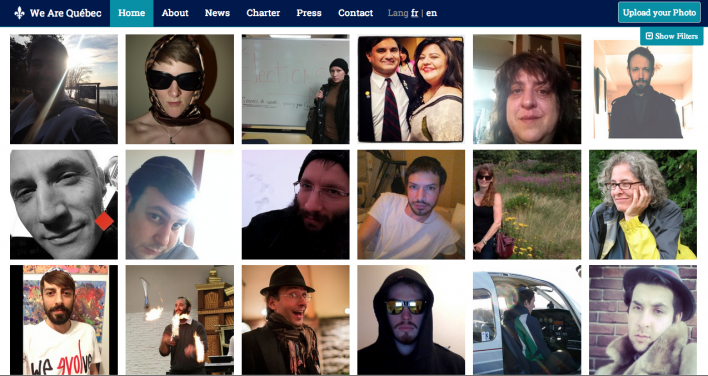 I’ve been toying with the idea of starting a business in Montreal for a while. Whether it be a startup, a cafe, a bar or even a drone flying center, it would require a substantial investment, time and commitment. The investment is not only in the business, but in the city, province and country as well.

With the state of Quebec politics, from sovereignty to anti-capitalism attitudes to a proposed charter of secularism, there was not only a certain divisiveness taking shape (or should I say being exacerbated), but the economy that was already in a downward spiral was only going to get worse if these policies were implemented. Investing here only made sense if I felt I was buying low. And I’m not that confident in my ability to time the markets.

But I didn’t want to be apathetic. I signed a petition against the charter. I filled up all of my friends social media streams with every gaffe the PQ was pulling. I donated $15 to the PLQ. I talked to people.

I wanted to do more.

So I had the idea of We Are Quebec. My working title for it was Hijabs vs. Kippas. Which I still think is more fun, but I was (wisely perhaps) talked out of it. The idea was to bring together those wearing “ostentatious” religious symbols and put a face to them. A signature becomes a stat. A face is hard to ignore.

Together with a group of friends, a developer, translator, proof-reader, creatives, and support from the great community here in Montreal, we put together WeAreQuebec.org in under a month.

We launched 2 weeks before the election. The feedback was great. At least among those who disliked the ugly face of divisive politics. The design, ease of use, the impact, the message seemed to connect with people. It got radio coverage (on CJAD and CKUT) and even made it onto a local Lubavitch blog.

It was moderately successful.

And may have contributed, if even slightly, to the election of a majority PLQ government, who claim to want to create a plural and economically viable Quebec. Fingers crossed, they’ve messed up before.

But, as part of my exercise in learning through creative exploration, I wanted to share a few things I picked up.

There are 3 ways to use a community to spread a message;

With any communication campaign a combination of all 3 is used, but they each have advantages and disadvantages. Given the timeline, my focus had to be on speed – how quickly could I generate some noise? The first thing I learned is that my message while supported and applauded by my community, wasn’t their message. Freedom of religion, the solidarity, was there. But to go to the length of putting on a religious symbol? A much tougher sell.

So I looked outside my community, emailed, and called dozens of organizations, muslim, jewish, sheikh, and others, with very limited response. Timing is everything. I don’t doubt that they were being approached by all kinds of media. Being the target of very controversial legislation, I was undoubtedly not the only one begging for their attention. (That and I’m pretty sure my emails went to your spam.)

So that left me to build a community. In 2 weeks, it would need a miracle or some brilliant creative. Unfortunately I didn’t have the time for either one. I’ve built communities before – the successful ones required time and patience.

The irony of a secular charter banning the wearing of ostentatious religious symbols is that the wearers could not be less ostentatious (save the rappers with their giant crosses?). They want to be left alone. They don’t want you to see them for their symbols. It’s for themselves, for their identity within the community. And from my informal impression – and completely unscientific methodology – believe that getting them to show their symbols was against what they stood for.

There were several communities built, that were more organized, with people devoting their full time energy to achieving their political goals. Canadians for Coexistence. J’Aime L’Anglais . Notre Montreal and many more. The most lacking element throughout this election campaign (and in the past)to me, was a coordinated resource for all citizen activism to share and promote each others work and create a collective, more powerful voice (I should thank Norman from Canadians for Coexistence). Though, that brings me to my next point.

There are no winners. I’m happy the divisive politics are on hold for a few years. I had at least one friend delete me from Facebook and another resort to calling Jews barbarians. It’s ugly. I admire those who do it for a living and don’t get corrupted. I admire the volunteers who fight for their beliefs and their drive (and reward) is only to create a stronger community. We don’t get resolution in politics. Politics should be irrelevant. We shouldn’t have to fight for freedom. Against corruption. For jobs. A good government is a quiet one. It’s way too noisy here.

People are fascinating. The people who’ve uploaded and that can be seen on wearequebec.org give you an idea of what we can do and who we are. Diverse. Fun. Beautiful. Ok, maybe too many anglophones…

Thanks again for all who participated!